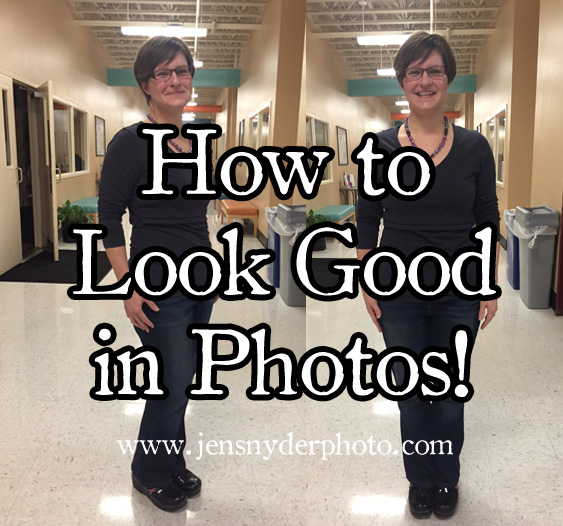 The number one thing I hear from Moms I photograph is “I’m not photogenic!”

It’s all about finding the right angle.

Today I’m going to teach you how to do it!

And to prove that it’s not about photoshop magic, lighting, and other tricks up a professional photographer’s sleeve, my examples were all taken in terrible lighting with my iphone (as I waited for my son to come out of preschool) with absolutely zero editing done other than a text overlay. Don’t get me wrong– good light and a gentle touch in photoshop will certainly make a good image gorgeous. Light is what separates a snapshot from a portrait, but a person can be in an unflattering pose in an otherwise gorgeous portrait set up, and that same person can look 20 pounds lighter and amazing in a snapshot.

I’d like you to meet my friend, Kim. My willing victim– I mean, test subject for you all. 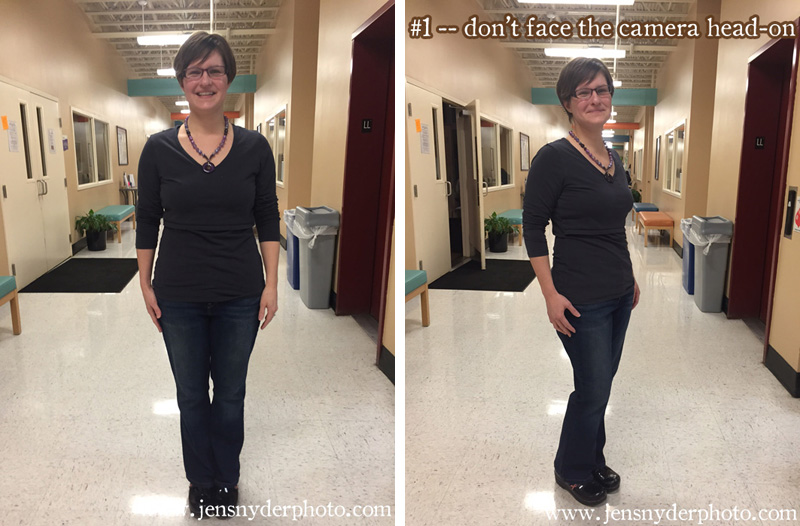 Tip number one... She’s beautiful, but the pose on the left isn’t doing much for her. This is what most people do in front of a camera. If someone stands in front of you, it’s natural to face them with your weight distributed evenly across your feet. It is also the most unflattering way to take a photo. It makes her appear wider than reality, and who wants to look wide or bulky?

Do you see how much more slender she looks on the right? All she did was turn her body almost 45 degrees to the camera. She put all her weight on her back leg and popped her front knee slightly. We didn’t do it for this example shot, but you can also have your front foot pointing at the camera for a further elongating/slimming effect in your legs.

Now let’s talk about arms. The upper arms is one of the biggest complaint area for women, can anything be done about that?

Absolutely! Again, it’s all in the pose. 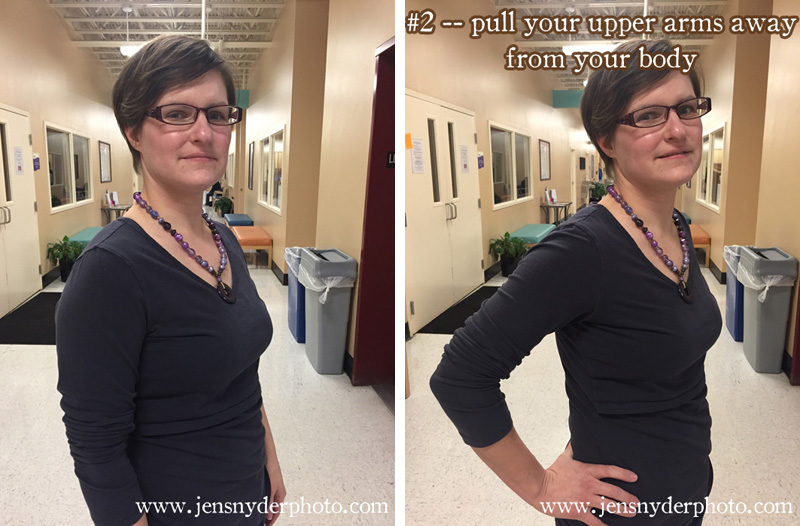 Tip number two… So she’s pointed about 45 degrees on the left photo, but her arms are down at her side. This makes her upper arms appear wider than they truly are, because they are leaning on her upper body. This effectively takes anything that isn’t bone and gently smashes it up front, creating a lot more visual bulk than is actually there.

See how slim her arms look on the right? The easiest thing is to just put the hand closest to the camera on your hip, but it doesn’t have to be that drastic of a pose. You can simply, ever so slightly, hold your upper arms away from your body by giving your elbows a slight bend instead of letting your arms hang by your side. (We did that in the first tip if you need an example to visualize, I had her rest her hands on her thighs and then pull them up towards her hips slightly)

Ok, but what about if you are sitting at a party and a camera comes around? It might be awkward to suddenly jump up and arrange yourself into this pose. 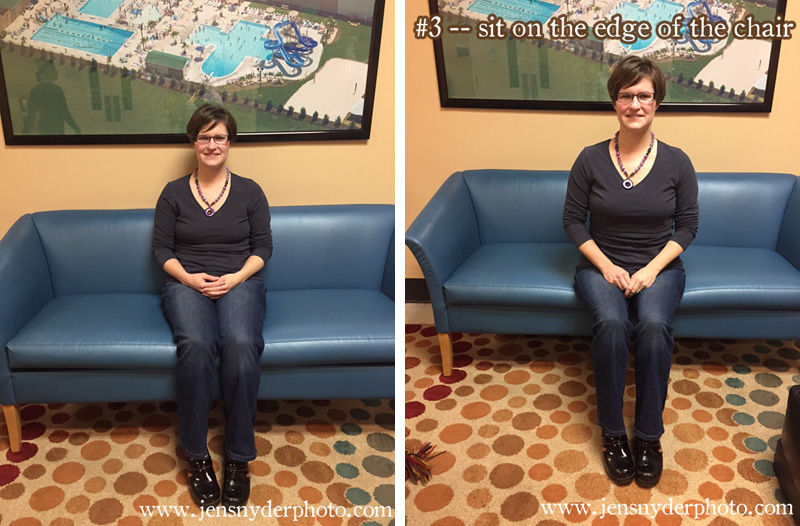 Tip number three… If you are sitting, leaning back in your chair will make you look heavier. It isn’t flattering for anyone at all, no matter how comfortable you are. On the left, her midsection is visually compressed, making it look thicker, lumpier and frumpier.

On the right, however, there is a huge difference! Here, I had her scoot forward so she was perching on the edge of the couch, making sure her spine was straight. We couldn’t do it comfortably here, but bonus points for also following tips 1 and 2 above for a sitting pose. Pointing your body away from the camera (about 30-45 degrees away) will further slim you out.

It really boils down to posture. Poor posture can make it look like you have a belly when you don’t (or if you have a “Mommy Belly” like me, it will make you look downright pregnant!) so make sure you have good alignment when a camera comes around. Shoulders pulled back, spine pulled up, hips in a neutral spot under you.

And now, the most important one of all, tip number four…

I intentionally didn’t coach Kim on smiling for these shots, so we ended up with a variety of the standard “fake smiles” that we all try to summon up when a camera is around. It can be hard to show a genuine smile when we are uncomfortable with a camera in our faces. Half the time I end up looking constipated or insane, and that is never flattering. Luckily, the fix for that is ridiculously easy. 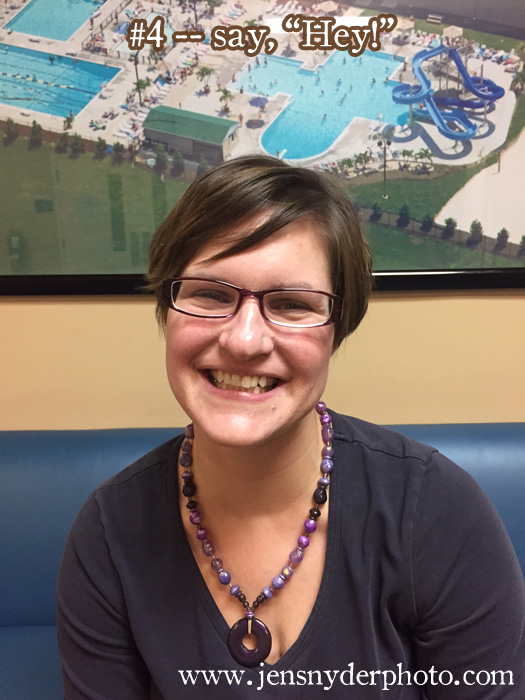 Do you see how her whole face lit up here? I had her say “Hey!” as the photo was taken. I’m serious- the shape your mouth makes with the word “Hey” is the same shape as a smile, so it won’t look forced. And because you are saying a word instead of trying to hold very still, it will involve your whole face for a more believable expression. It’s the same concept of Tyra Bank’s “smizing” (smile with your eyes) except when I try to smize I look psycho. When I say “hey,” I look happy. Try it in front of a mirror sometime!

I hope this helps you to feel more confident when a camera is around. Now, go out there and get in the photos with your kids! They will thank you for it later.

Jen Snyder is an artist and photographer from Harford County, MD.

Thanks for the memories!

I am no longer taking clients so I can focus on personal work.